Among all the beasts from the slavic areas, that are mentioned in folk myths, Drowner is the most recognizable and there’s a lot of information about him, that have been kept. Drowners are known under several names – utopnik, utoplec, utopek, topek, topielec (drowned dead, drowned man), waserman, vodyanoi – usually, they had the same ancestry.

Drowner became the soul of a man, who committed suicide by drowning himself. Such person couldn’t rest in peace until he pulled someone under the water, who can take his place.  For a drowner it was a penance for selling his soul to the devil (suicidal death). Other sources claim, that drowners were illegitimate children, cursed by their mother and  dead without a baptism or from a miscarriage.

Drowners could watch for a victim all day, emerging from the water only at night. He hated the most a human voice saying “it’s a  dawn already”, because it meaned going back under the water surface. In his anger, he could create whirpools, or cause a flood in the farmlands and human settlements, but his main task was to pull people and cattle to the depths. The second one shows his large strenght.

A faith in water demons comes from people’s self preservation instinct, the stories about Drowners were supposed to protect people from accidental drawnings, by paying more attention when being close to the water areas.


Drowner grow up in the bottom of a lake for 7 years before he starts his harmful activity. Drowners show up in the form of a naked, thin man with long hands, legs and a green slippery body. Also, he differed from a human because of his big head with black hair and  bulging eyes, white or red colored. Witnesses described them mostly as short people, similar to a 7-12 year old boy. They were often seen after midnight, when they were coming to the shore and clapping their hands on the water, which heralded someone’s death.

Drowners are becoming popular nowadays thanks to the game Witcher, which was based on A. Sapkowski’s books. 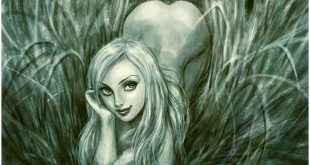 Nixie and Berehynia, the water ladies

Nixie, or else undine, or living in the mountain areas berehynia and a nymph. A …