Depending on the Slavic area, Leshy is also known as  laskowiec, sylvan, boruta (might be connected with Bies) and as a forest old man or forest Likho (the etymology of the words Likho and Leshy is quite similar).

A forest protective demon/ghost is its lord and a master of living there animals.Towards people, his behaviour was changing, from neutral to hostile. It depended mostly on how people treated the forest and its creatures. Leshy was especially unfriendly to hunters and lumberjacks, who were clearly violating his ecumene. Depending on his attitude, he could either misguide people, or help them to find a way out from the forest, play pranks by, e.g scattering forest undergrowth from the basket, or protect them from wild animals attacks. Formerly, the place, where Leshy’s presence, or signs of his activity, were observed, was considered as a sanctuary. It was forbidden to come in to that part of the forest, but more importantly, to cause damage (cutting down trees etc.), hunt, or collect fruits of the undergrowth (kind of like nature reserves).

Leshy had well developed polymorphic skills. Most commonly, he was appearing as an anthropoid creature, old  man with a beard, sometimes a one eyed cyclops, or a person with unnaturally white face. He could change his sizes due to the height of the forest. Moreover, he could take the form of animals such as wolf, bear, eagle-owl, or even transform into wind. Leshy’s helpers were  various small demons, ghosts and forest imps, such as auk (the ghost of echo), puszczewik, Mochowiks, (guardians of mosses) Lugowoj and Polewoj. There were also caring creatures, for example grybicz, jagodynicz, pczelicz, whose names clearly show what kinds of forest “inhabitants” they were taking care of. (the names in Polish are associated sequentially with: mushrooms, blueberries, bees).

We are encouraging you to visit our shop, where you can buy slavic t-shirts with Leshy image.

Leshy is getting more popular thanks to the series of games about the Witcher, where he was mapped on the slavic beliefs. 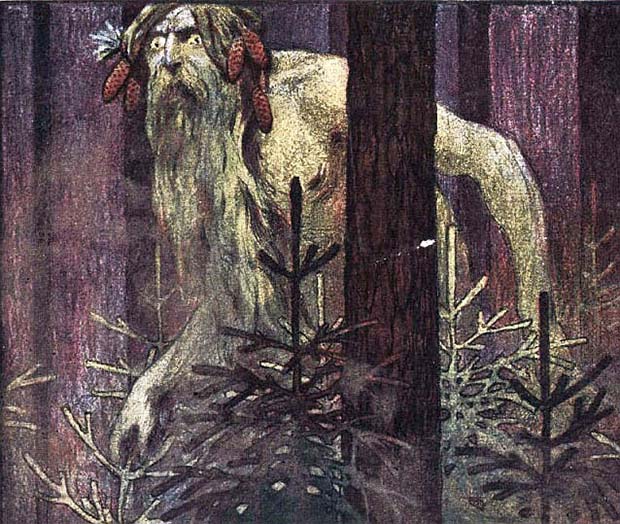